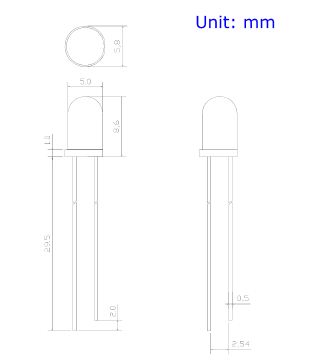 LED = “Light-Emitting Diode”; Like all lightbulbs, light-emitting diodes (LEDs) produce illumination by turning a given amount of electric current into light. LEDs perform this conversion more efficiently than standard incandescent bulbs: According to the U.S. Department of Energy, a typical Energy Star-rated LED uses 20 to 25 percent of the energy that an incandescent bulb uses; the LED lasts up to 25 times longer, too (see References 5). The amount of light a bulb generates can be measured in a unit called lumens. Electrical power is measured in a unit called watts. Due to their methodology of converting electricity into light, LED bulbs feature a higher ratio of lumens to watts than incandescent bulbs.

Candelas are a measure of the amount of light generated at a source. Lumens quantify how much total light flows away from the source. Foot-candles and LUX indicate how well the surface area of an object, wall or floor is illuminated at some distance away from the source (intensity of the light reflecting off objects like the floor, wall, or worksurface).